For decades we have known that EMSEAL precompressed foam sealants are good at blocking sound.  We just didn’t know how good. Our acoustic-specific product, QuietJoint, is now being widely used to block sound at partition-to-perimeter wall joints and other flanking paths while the acoustic value or our other precompressed hybrid sealants has been revealed through testing.

When we engaged the services of a independent laboratory we were impressed by a number of things.

We learned first of all that it is not easy to build a really ‘quiet’ wall.  And that even when you do, the effectiveness of that wall can, for all intents and purposes, be negated if it is divided by a structural expansion joint as a flanking path is created through which the sound will pass.

The lab built several walls for us–STC 56, 68 and 72.  Regardless, when they divided that wall with an unsealed, 2-inch structural expansion joint, the wall’s STC dropped to 17!  To the human ear this is like the wall isn’t really there at all.

However, by sealing the joint with a configuration of EMSEAL precompressed foam sealant, the original STC of the wall could be fully restored.

To maintain the acoustic integrity of an exterior or interior wall, all EMSEAL precompressed hybrid foam products achieve the highest degree of sound attenuation by suppressing sound transfer at expansion joint gaps and in so doing contribute to the quality of the occupant environment and can even contribute to LEED rating.

All EMSEAL pre-compressed foam products have STC ratings above 50 when tested in STC 56 or better walls. Starting at a STC rating of 52 (based on installation in just one side of a wall) products range up to a STC rating of 62. Installed on both sides of a STC 72 wall we have tested QuietJoint to match the STC 72.

Note: All tests were run by an independent laboratory and were conducted to ASTM E-90–Test Method for Laboratory Measurement Airborne Sound Transmission Loss of Building Partitions and Elements.

This testing classification is used to specify the sound transmission loss properties of exterior building elements such as walls and windows. OITC uses outside noise sources such as traffic, aircraft and trains to calculate a this rating. OITC is a commonly used rating for exterior walls. STC and OITC are independent unrelated tests which do NOT use a common numbering system for results. A high STC rating does not necessarily mean that the same wall will automatically receive a high OITC rating because they are tested for different acoustic sources and sound frequencies. However, as general rule of thumb, OITC results usually display a number that is 70% – 80% of the STC number.

Regardless of your STC or OITC it is possible to specify an EMSEAL precompressed sealant that will not degrade the acoustic performance of the interior or exterior wall or partition.

Emshield WFR2 Performance: In a wall with a STC 68 rating, WFR2 was tested to have a STC 62 rating thereby maintaining the sound suppressing capabilities of the host wall. It also posted an OITC 52 rating. 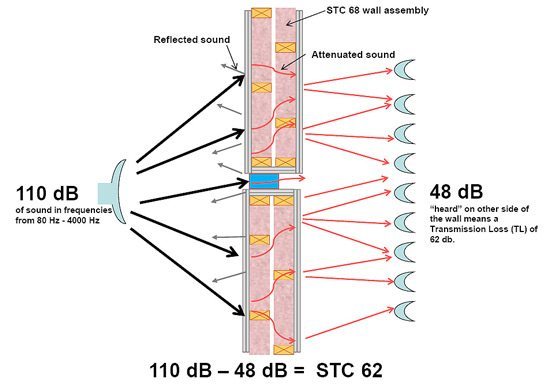 The impressive acoustic make-up of WFR2 is also matched with these features:

With Emshield, the product achieves waterproofing, fireproofing, structural movement and soundproofing all in a single product. When you’re searching for an acoustic expansion joint, you’ll find that EMSEAL products supply acoustic performance in addition to their many other product features.

SEISMIC COLORSEAL (STC 52) One Side of STC 56 Wall

Seismic Colorseal-DS, Standard Depth (STC 54) One Side of STC 56 Wall

Seismic Colorseal-DS, Custom 6-inch Depth (STC 62) in One Side of STC 68 Wall

*The following explanation of sound transmission class taken largely from Wikipedia gives an excellent overview of STC and OITC:

Sound Transmission Class (or STC) is an integer rating of how well a building partition attenuates airborne sound. In the USA, it is widely used to rate interior partitions, ceilings/floors, doors, windows and exterior wall configurations (see ASTM International Classification E413 and E90). Outside the USA, the Sound Reduction Index (SRI) ISO standard is used.

The STC number is derived from sound attenuation values tested at sixteen standard frequencies from 125 Hz to 4000 Hz. These transmission-loss values are then plotted on a sound pressure level graph and the resulting curve is compared to a standard reference contour.

Acoustical engineers fit these values to the appropriate TL Curve (or Transmission Loss) to determine an STC rating. The measurement is accurate for speech sounds but less so for amplified music, mechanical equipment noise, transportation noise or any sound with substantial low-frequency energy below 125 Hz.

Outdoor-Indoor Transmission Class (OITC) is a standard used for indicating the rate of transmission of sound between outdoor and indoor spaces in a structure that considers frequencies down to 80 Hz (Aircraft/Rail/Truck traffic) and is weighted more to lower frequencies.

STC is roughly the decibel reduction in noise a partition can provide, abbreviated ‘dB’. The dB scale is a logarithmic one and the human ear perceives a 10dB reduction in sound as roughly halving the volume – a 40 dB noise subjectively seems half as loud as a 50 dB one.

If an 80dB sound on one side of a wall/floor/ceiling is reduced to 50dB on the other side, that partition is said to have an STC of 30.

Typical interior walls in homes (2 sheets of 1/2″ drywall on a wood stud frame) have an STC of about 33. When asked to rate their acoustical performance, people often describe these walls as “paper thin”. They offer little in the way of privacy. Adding absorptive insulation (i.e. fiberglass batts) in the wall cavity increases the STC to 36-39, depending on stud and screw spacing. Doubling up the drywall in addition to insulation can yield STC 41-45, provided the wall gaps and penetrations are sealed properly.

Note that doubling the mass of a partition does not double the STC. Doubling the mass (going from two total sheets of drywall to four, for instance) typically adds 5-6 points to the STC. Breaking the vibration paths by decoupling the panels from each other will increase transmission loss much more effectively than simply adding more and more mass to a monolithic wall/floor/ceiling assembly.

Structurally decoupling the drywall panels from each other (by using resilient channels, steel studs, a staggered-stud wall, or a double stud wall) can yield an STC as high as 63 or more for a double stud wall (see table below), with good low-frequency transmission loss as well. Compared to the baseline wall of STC 33, an STC 63 wall will transmit only 1/1000 as much sound energy, seem 88 percent quieter and will render most frequencies inaudible.

To get to STC 68 it is necessary to have essentially two walls back-to-back with an air gap between them, fiberglass insulation between the studs and a double-layer of 5/8-inch sheet rock on each face.

Due to their high density, concrete and concrete block walls have good TL values (STC’s in the 40s and 50s for 4-8″ thickness) but their weight, added complexity of construction and poor thermal insulation tend to be limitations. [1]

It must be noted that acoustical performance values such as STC are measured in specially constructed acoustical chambers and field conditions such as lack of adequate sealing, outlet boxes, back-to-back electrical boxes, medicine cabinets, flanking paths and structure-borne sound can diminish acoustical performance. The as-built ‘field-STC’ (FSTC) is usually lower than the laboratory-measured STC.

In jurisdictions where IBC 2006 is used, this requirement may not apply to all dwelling units. For example, a building conversion may not need to meet this rating for all walls.

In serious cases (for instance, a bedroom adjacent to a home theater room, and an inconsiderate nocturnal neighbor, to boot) a partition to reduce sounds from high-powered home theater or stereo should ideally be STC 70 or greater, and show good attenuation at low frequencies. An STC 70 wall can require detailed design and construction and can be easily compromised by ‘flanking noise’, sound traveling around the partition through the contiguous frame of the structure, thus reducing the STC significantly. STC 65 to 70 walls are often designed into luxury multifamily units, dedicated home theaters, and high end hotels.

The demanding THX reference standard (a guideline for high-quality audio in movie soundtracks) requires partitions to achieve 50dB of attenuation at 63 Hz. Few walls can meet that, as that requires a wall with an STC of 80 or higher. For all practical purposes, no sound will be heard on the other side of the wall with this level of construction.